This Modern Slavery Awareness online training course explains forms of slavery, and identifies which countries and industries are vulnerable to slavery. It covers what companies should do about slavery and identifies steps people can take to help combat slavery. The course also outlines anti-slavery laws in the UK including the Modern Slavery Act 2015.

The training course duration is around 1-2 hours.

What is Modern Slavery?

Modern slavery is a mainly hidden crime that targets the most vulnerable and preys on the weak. The term Modern slavery covers several different forms of exploitation including human trafficking, domestic servitude, and sexual, criminal and labour exploitation.

Who is Modern Slavery Awareness training for?

The course is for anyone in any business since modern slavery should be a concern to everyone. Awareness of slavery issues will help you contribute to your employer’s initiatives to combat slavery. The training will help you to spot signs of slavery and trafficking. You will learn how to report cases.

What are the learning outcomes for the Modern Slavery course?

At the end of the course you will be able to:

When do I get my Modern Slavery Awareness certificate? 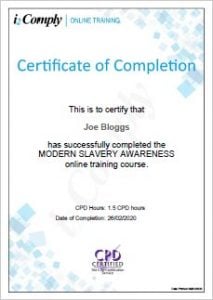 When you have passed the assessment you will be able to download and print your certificate straight away.

All of our courses conform to CPD guidelines. The CPD Certification Service has accredited the course. Your certificate will include the CPD logo so you can use it as evidence of compliance. 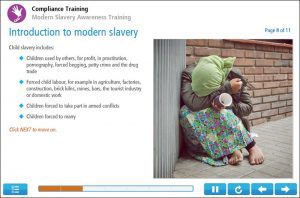 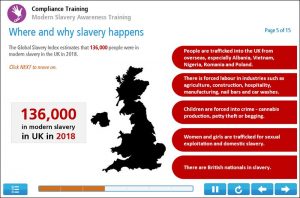 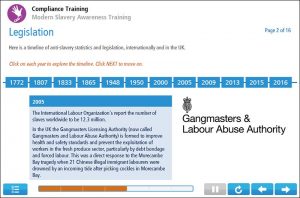 What does the Modern Slavery Awareness course cover?

The first topic defines modern slavery and human trafficking. Then it identifies different forms of slavery.

2 – Where and why slavery happens

The second topic identifies countries and industries that are vulnerable to slavery. It goes on to explain why slavery happens today and discusses the limitations of social auditing.

The third topic gives a timeline of slavery laws. It also outlines anti-slavery law around the UK.

Topic 4 explains which companies need to produce modern slavery statements. Next, it identifies two important legal requirements of these statements and also the sort of information that should be included. Finally, the topic covers where the statement can be registered.

The final topic identifies warning signs that indicate someone may be a victim of slavery or trafficking. Then it outlines what to do if you suspect someone is a victim. The topic also describes other things you can do about slavery.

After you have viewed all five topics, you will be allowed to take the assessment. The assessment is built from question banks which makes it different each time you take it. This also means the training is suitable as both first-time and refresher training.

Take the assessment as often as you need to. You will get useful feedback so you learn from any mistakes.