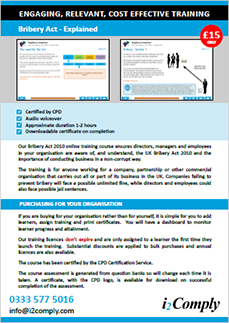 Our Bribery Act 2010 online training course ensures directors, managers and employees in your organisation are aware of, and understand, the UK Bribery Act 2010 and the importance of conducting business in a non-corrupt way.

Who is it for?

Anyone working for a company, partnership or other commercial organisation that carries out all or part of its business in the UK. Companies failing to prevent bribery will face a possible unlimited fine, while directors and employees could also face possible jail sentences. 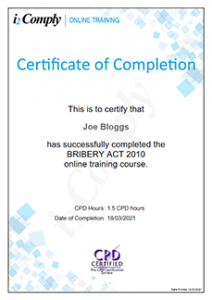 When do I get my certificate?

When you have successfully passed the course you will be able to download and print your certificate straight away.

As this Bribery Act 2010 online training course has been accredited by the CPD Certification Service, your certificate will contain the CPD logo and can be used to provide evidence for compliance. 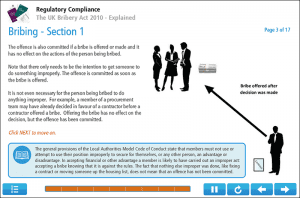 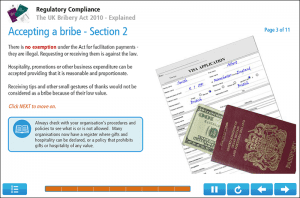 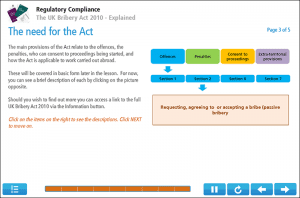 What does the course cover?

The need for the Act

How does the Bribery Act affect you?

Failure of an organisation to prevent bribery – Section 7

There is no limit on the number of attempts at the assessment and informative feedback is given so candidates can learn from their incorrect responses.